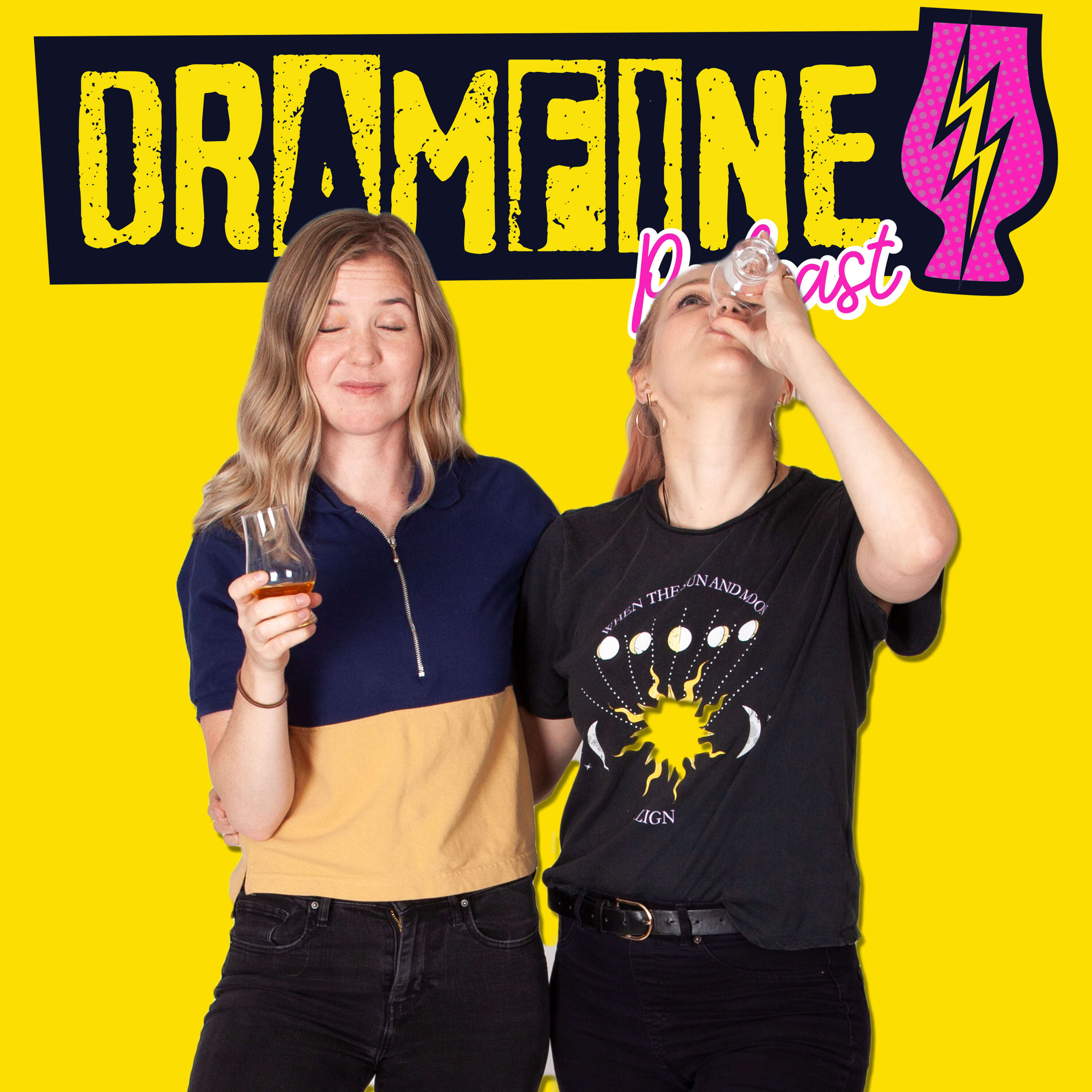 Pam and Chel take you through a harrowing through their whiskies of Christmas Past, Present and Future. Will they discover the true meaning of Christmas!!!Also, a Dram Fine Gift Guide to help you pick that perfect bottle of whisk(e)y for the Holiday season.This Episode is sponsored by Sherbrooke Liquor,  one of the World's Best Top Bottle Shops.Thank you for listening and remember to drink respectfully!We want to hear from you! Send us an email at dramfineyeg@gmail.com

Season 3 is among us! Pam and Chelsey are thrilled to welcome Becky Paskin to help launch our latest season on Dram Fine. Becky is an established journalist, editor, presenter and consultant specialising in whisky and other spirits for over 15 years!

We sit down and speak with her about the relaunch of “Our Whisky” – a modern whisky club that is all about diversity and inclusion. We also pair some of our favourite whisky with candy!

This is not a Scotch Episode — we repeat — this is not a Scotch episode. We are joined by a very influential woman in Irish Whiskey. Chelsey and Pam chat with the amazing Louise McGuane. She’s the first modern whiskey bonder in Ireland in well over 50 years, the founder of JJ Corry Irish Whiskey. She’s been featured in the likes of Forbes magazine and her bottlings have already won numerous awards.

S3 E3: For Those About to Be Sustainable (We Salute You)

Chel and Pam discuss some of the main issues of waste when it comes to distillation and how some distilleries are going to great lengths to lead the way in sustainable practices. Also, we talk about prairie oysters.

Pam and Chel chat with the incomparable Shelley Sackier, Author of the fantastic book Make it a Double.  Shelley tells us all about her journey from whisk(e)y hater to whisk(e)y lover and how she translated that pilgrimage into writing this must read book.

Since she’s also the director of Whisky Education at Reservoir Distillery , she leads through a tasting of 3 tasty whiskies.

We’re BAAAAAAAACK!. Yes indeed, it is the season two premiere and we’re comin’ in hot with some spooky tales from some of our favourite distilleries! Also find out what happens when a spooky story accidentally turns sexy. It can happen! Plus, find out what we think of the featured whisky of the pod, the Lagavulin D.E

We also try some amazing whisky during the episode, The Kujira 10 and the Shinobu Blend!

Jamie and Gemma then lead us through a tasting of one of the great Balvenies – The Caribbean Cask.

We discuss batches while comparing 2 versions of the GlenAllachie 12 year old, the 2018 batch and the 2020 batch. What’s the difference? And, what is a batch anyway?

We also chat about GlenAllachie’s journey since being purchased by Billy Walker and how far they’ve come with him steering the ship over the last few years. We also have a dram of the 15 year old.

Peat! Who’s got it!? Who wants it!? Who needs it!? Just some of the questions we ask this podcast where we are talk all about peat and the super-peated Octomore Series by Bruichladdich.

The time has come to elevate your Half n’ Half!

We love whisky, that much is obvious, but here’s a confession: Sometimes, on a hot summer’s day, we want BEER! Luckily for us, beer and whisky had a lot of similar ingredients and flavour profiles which makes them a perfect pairing duo. On this episode, Chelsey and Pam try 5 different “elevated” beer and whisky pairings to beat the heat.

In this damn fine episode, Chelsey and Pam had the opportunity to chat with Global ambassador for Douglas Laing, Stuart Baxter! Stuart puts on an absolute clinic and chats to us all about Douglas Laing and gives you plenty of reasons why your next bottle of whisky should come from and independent bottler.

We dIn this episode, Pam and Chelsey are heading into the ever enchanting cocktail world to talk about whisky cocktails. Since there is more to cocktails than we can shake a stick at, we enlisted the help of some cocktail experts to chat about why whisky cocktails are so iconic.

EPISODE 9 – WHISKY FROM WHERE?!

In this episode, we travel to some countries you wouldn’t necessarily associate with whisky and find ourselves asking, ‘whisky from where?!’

They say all good things must come to an end, and podcast seasons are no exception. In this Season TWO finale, Chelsey and Pam take some questions from some listeners and past guests.

In this episode, you’ll get to know whisky fanatics Chelsey and Pamela as they introduce themselves, and the Dram Fine podcast. Enjoy a sip of Bruichladdich, Classic Laddie with these two, as they discuss what sparked their love of Scotch.

Nosing 101 with Chelsey and Pamela. An excellent line up of three very different Scotches that are wonderful on the nose. Feat. Auchentoshan American Oak, Aberlour A’bunadh and Arran St Emillion.

EPISODE 3 – HOW SCOTCH IS MADE

Join us as we take you on virtual distillery tour and explain the bare-bones-basics of scotch making.Also, hear us chat about our thoughts on the featured whisky of the episode – – Bowmore 15.

On this episode, Chelsey and Pam discuss the wonderful and often misunderstood world of blended whisky. Also, hear their thoughts on the featured drams of the episode; Great King Street and a Spice Tree Old Fashioned cocktail.

EPISODE 6 – TOAST TO THE GHOST

Are you spooky? On this episode, we’re heading to the “other side” of the podcast and talking about some distillery folklore. We chat about a some pretty cool distillery spirits, and we don’t mean the scotch! One of which was just concerned about whisky quality assurance and another one single handedly ended a distilling ban. Nice one, ghost!

We also chat about the featured dram of the podcast, the Jura Prophecy. Who could have saw that coming?

EPISODE 7 – SCOTCH REGIONS: WHERE THE HECK?

Islay, Highlands, Lowlands! What does it mean when talking about scotch, and does it mean anything at all??Join us as Pam takes us on a virtual tour of Scotland. Will we make it out alive? Only time will tell. We talk about all 5 (or is it 6) regions of Scotland and how each area contributes to the flavour profile of their respective scotches. We also give our thoughts on 3 scotches: Glenkinchie 12, Glenfarclas 12 and Springbank 15.

EPISODE 8 – THE ONE WHERE WE TALK ABOUT BARELS

On this episode, Chelsey and Pam talk about the transformative magic of BARRELS. Learn about how the flavour is infused into the spirit and all the factors that affect the process… because there’s a lot!We also have a few thoughts on the Jim Murray Whisky Bible controversy and our own experiences with sexism in the industry.Also, check out our thoughts on the feature whisky of the podcast, the Edradour Ballechin 8 year old. Spoiler alert: we like.***tech note*** Chelsey’s Mic broke, so we apologize for her sound quality!

EPISODE 9 – THE ICON OF LAPHROAIG

On this PENULTIMATE season 1 episode, Pam and Chels get into the story of Bessie Williamson, icon of Laphroaig Distillery and overall badass. Also hear our thoughts on a Laphroaig classic, the Quarter Cask. You can probably smell it by just saying its name…

IT’S THE SEASON FINALE! Chelsey and Pam wrap up season one with Dram Fine’s very first guest, Bryan Simpson (@whiskybry). He is not only the National Brand Ambassador to Ardbeg and Glenmorangie, but the ideal person you’d want to grab a Hauf and Hauf with. Together we talk about our love of not only scotch, but Twin Peaks as well. We drink some Ardbeg An Oa, a Twin Peaks inspired cocktail and dip into each others infinity bottles. Who’s infinity bottle will reign supreme? Thank you all for listening! The Whisky Community has been so welcoming and it’s an honour being part of it. Hope to see you back for SEASON TWO!

BONUS EPISODE! – WHAT WOULD THEY DRINK?

Listen to the unedited recording from the season finale and hear the full game of WHAT WOULD THEY DRINK – Twin Peaks Edition. Chelsey and Pamela draw Twin Peaks characters out of a hat and decide the whisky they would drink. Ft. Bryan Simpson Ardbeg National Ambassador. Hilarity guaranteed.